The Department of Justice announced in a press release last month that Skyline Urology has agreed to pay the United States $1.85 million to resolve allegations that it violated the False Claims Act by submitting improper claims to the Medicare program for evaluation and management services.

The press release states that between January 1, 2013 and December 31, 2016, Skyline Urology allegedly submitted false claims to the Medicare program for evaluation and management (E/M) services that were not allowable under Medicare. The guidelines generally prohibit healthcare providers from separately billing for E/M services provided on the same day as another medical procedure, unless the E/M services are significant, separately identifiable, and above and beyond the usual preoperative and postoperative care associated with the medical procedure. If an E/M service satisfies these criteria, the provider can use a billing code known as “Modifier 25” to bill for the significant and separately identifiable E/M services. The government alleges in this case that Skyline Urology used Modifier 25 to improperly unbundle routine E/M services that were not separately billable from other procedures performed on the same day, and, as a result, improperly claimed compensation from Medicare for certain urological services.

Skyline Urology has also entered into an Integrity Agreement with the U.S. Department of Health and Human Services, Office of Inspector General that will require regular monitoring of its billing practices for three years. The lawsuit was filed under the qui tam, or whistleblower, provisions of the False Claims Act, which permit private individuals to sue on behalf of the government for false claims and to share in any recovery, which amounts to approximately $323,750. The claims resolved by the settlement are allegations only and there was no determination of liability. 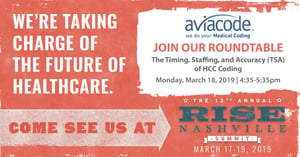 Aviacode has experienced medical coders ready to help ensure compliant coding -- whether it be HCC, professional fee, or facility coding. If you're looking to understand your HCC coding and data validation options, be sure to stop by Aviacode's booth #28 or its "The Timing, Staffing, and Accuracy (TSA) of HCC Coding" roundtable at the upcoming RISE Nashville Summit.